Self-reporter : With the holy festival of Muslims, Eid-ul-Azha in front of them, the sacrificial animal market is sitting in Gopalganj like the rest of the country. However, due to the low number of buyers, there are not enough cows in the market. The price of cattle is lower than other years due to corona. As the source of income of the common man has decreased due to this terrible virus, the number of buyers has also decreased as compared to other years. This has reduced the sales at the sacrificial animal market. As a result, farmers and traders are worried.
It is learned that on the occasion of the upcoming Eid-ul-Azha, 13 cattle markets are being set up in Gopalganj this year. Besides selling cattle, online sale of animals has also started. Although the subject is new, many people are leaning towards the online animal market during the coronal period.
Five online animal markets have been opened for sale in five upazilas of Gopalganj. Animal sellers and buyers are able to go online and select animals to shop. Anyone can go to Gopalganj Online Cattle Market (www.gopalganjhat.com) for animal bikini. 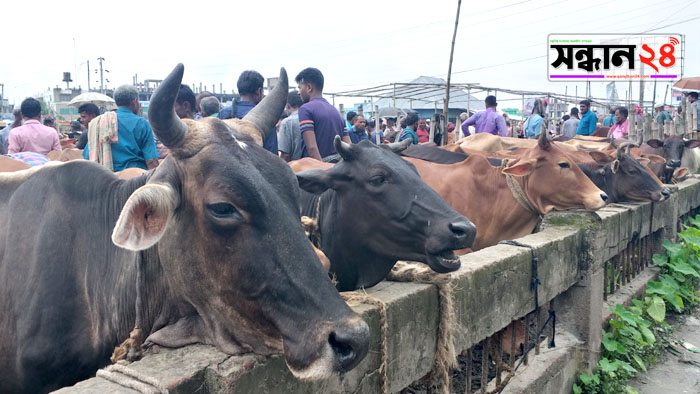 It can be seen that there are enough cows in the market. However, as there are less buyers in the market, the sales are less as expected. And some of those who are coming to the market are buying cows but most of them are leaving the market.
This time, due to the epidemic Corona virus, people have become unemployed and many people are not able to make sacrifices even if they want to. Those who sacrificed animals last year are now thinking of sacrificing in part. Buying and selling cows at normal prices is much less than other times. And the farmers and small marginal farmers are worried.
The farmers said that if the price of cattle is seen this year, we will face a lot of losses. However, during the epidemic of corona virus, the tendency to follow health rules was not seen in the market. The people who came to the market have given various excuses.
Sadar Upazila Animal Resources Officer Dr. Govinda Chandra Sarkar said, “We are regularly monitoring the cattle markets in Gopalganj.” In addition to regular cattle markets, we also have online cattle markets. Anyone can buy and sell online if they wish.
Farmers and traders hope that they will be able to sell the animals at the end of the sacrificial animal market.

JM IT Solution ahead in IT services

JM IT Solution ahead in IT services